College Football Hall of Famers Who Are Olympic Medalist 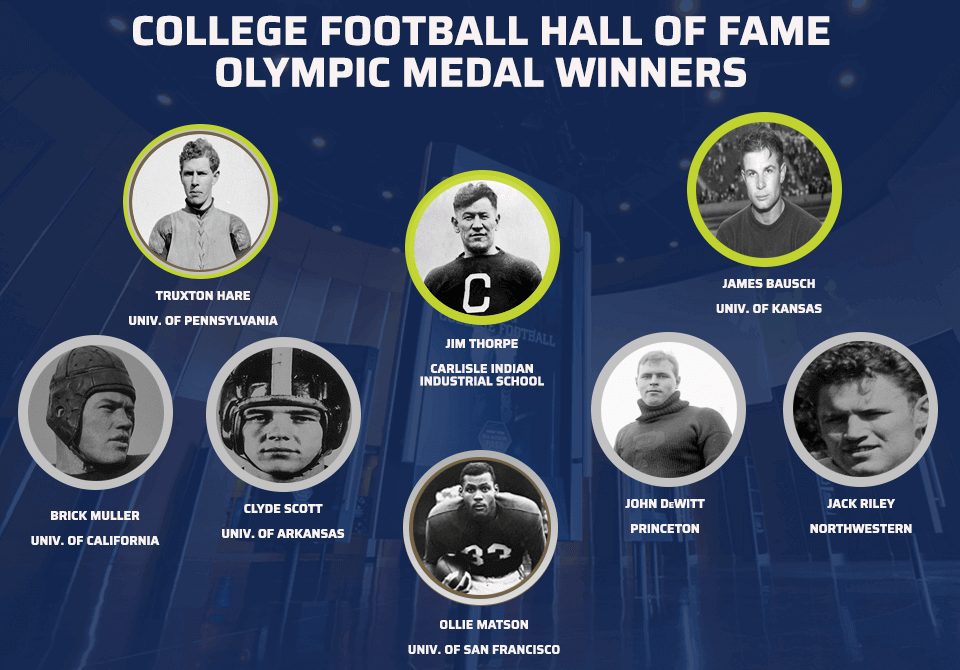 In 1984, the International Olympic Committee was founded, giving way to the first modern Olympics held in Athens, Greece in 1896. The Olympic Games are set to take place this year, 2021 in Tokyo, Japan, as the games were postponed a year because of COVID-19. The College Football Hall of Fame is digging through the archives and looking back at our eight Olympic medalists that are enshrined in the College Football Hall of Fame.

Thomas - Truxton Hare is one of a handful of men to be a four-time first-team All-America. According to Walter Camp, Hare was the only player who could have made All-America at any position. He was selected as a charter member of the College Hall of Fame (1951) and has been named to numerous all-time All-America teams. Playing guard in the guards-back formation, Hare ran, punted, kicked off, and drop-kicked extra points. He called signals and was captain two years. He played every minute of every game for four years. Penn went 15-0 his first year, 1897, and was 47-5-2 in his career. He scored two touchdowns against Michigan in 1899 and made a 65-yard run against Cornell in 1900. He was on the 1900 Olympic track team at Paris, placing second in the hammer throw and first in the tug of war. He added a law degree at Penn in 1904, practiced law in Philadelphia, served as president of Bryn Mawr Hospital, excelled as a painter, and wrote eight books for boys.

All-America guard John DeWitt was a relentless blocker and tackler for the Princeton Tigers. He was a strongman, whose ferocity struck fear into the hearts of many enemy lineman. DeWitt brought a definite brilliance to the forward wall on those great Tigers teams of coach "Doc" Hillebrand. During DeWitt's three varsity seasons, the Tigers were 28-2-1. One of John’s standout games was during the annual battle between Princeton and Yale. Things were not looking good for the Tigers and their 10-game winning streak was in jeopardy, when the Bulldogs scored the first points of the season against the Tigers. Then, seemingly out of nowhere, came the rush of John DeWitt. He caught the ball in mid-air and raced 70 yards for a Tiger touchdown, then kicked the conversion point that tied the game at 6-6. Late in the contest, DeWitt struck again, this time on a 53-yard field goal which provided the winning points in an 11-6 Princeton victory. The Tigers finished the season at 11-0-0 and won the national championship, due largely to the efforts of this drop-kick specialist. The Princeton legend was an Olympian in the 1904 Olympics in Saint Louis, Missouri, earning a silver medal in the Hammer Throw. DeWitt was enshrined in the College Football Hall of Fame in 1954.

Gold Medalist in both Pentathlon and Decathlon (1912)

James Francis Thorpe was born May 28, 1888, on a Sac and Fox Reservation at Prague, Oklahoma. Thorpe played halfback for the Carlisle Indian School in 1907-08, again in 1911-12. In 44 games he had 53 touchdowns, 421 points. Statistics for 29 of the games show he averaged 8.4 yards in runs from scrimmage. In 1912, he had 29 touchdowns and 224 points, leading the nation. At the 1912 Olympics in Stockholm, he won the pentathlon and decathlon. He played pro football 1915-28, major league baseball 1913-19, and witnesses said he excelled in any sport he tried. That included golf, tennis, lacrosse, field hockey, riding, rowing, gymnastics, archery, bowling, darts, billiards, basketball, swimming, boxing, wrestling. The honors piled up: 1950, named greatest athlete of the half-century 1900-49 by Associated Press sports editors; 1951, elected to College Football Hall of Fame; 1951, movie of his life "Jim Thorpe All-American" stars Burt Lancaster; 1957, a town, Jim Thorpe, Pa., named for him; 1963, elected to Pro Football Hall of Fame; 1984, a Jim Thorpe stamp issued by the U.S. Postal Service; 1998, Thorpe again was honored with a stamp by the Postal Service.

Harold "Brick" Muller could throw a football 60 yards on a line, yet his leg strength was such that he captured an Olympic Silver Medal in the 1920 high jump. At California, Muller never tasted defeat while starring for the Golden Bears during the era of coach Andy Smith's "Wonder Teams" of the West. Muller was a three-time All-America end, twice being named to the consensus first team. In California's 28-0 victory over Ohio State in the 1921 Rose Bowl, Muller got the ball on an end-around play. He stood at his own 45-yard line and threw a touchdown pass to Brodie Stephens, who caught it on the Buckeye goal-line, a tremendous heave in those days of the "fat" football. In later years, memories of that pass brought a chuckle to Muller: "At first, the ball was reported to have traveled 70 yards in the air," he related, "but over the years Los Angeles sports writers whittled it down to 53 yards." There would be fond memories other than those of the 1921 Rose Bowl triumph, as well: for instance, his scoring the only touchdown in the 1922 Ohio East-West Invitational Classic at Columbus. "Brick" followed his collegiate playing career with A.B. and M.D. degrees from Berkeley, and later practiced as an orthopedic surgeon.

John Horn Riley, one of four brothers to play football for Northwestern University, was a key man in the school's glory years of the early 1930's. Northwestern had a 20-5-1 record and won two Big Ten championships in his time. By later standards, Jack Riley would be considered a small tackle, at 6-2 and 218-pounds. But in 1931 he was the biggest man named to the All-America team. Riley wrestled at Northwestern and was the national collegiate heavyweight champion in 1931 and 1932. He also won a silver medal in wrestling in the 1932 Olympics. His third sport was rowing, and he captained a championship crew for St. John's Military Academy in 1927. Riley played pro football two years with the Boston Redskins and was a professional wrestler two years. He retired undefeated after 132 pro bouts. He entered the U.S. Marines in World War II and rose to the rank of major. After the war he worked as a manufacturer's representative, and for ten years, 1948-1957, was the Northwestern University wrestling coach.

The "Wichita Whiz," James Bausch was a world-class athlete who was the decathlon champion at the 1932 Los Angeles Olympic Games and the winner of that year's Sullivan award. Bausch transferred from Wichita State to Kansas, angering Wheatshocker fans and officials, who accused the Jayhawks of tampering. After a 4-4 season in 1929 the 200-pound half back led Kansas to its first Big Six championship in 1930. Against Kansas State he returned the opening kickoff 95 yards for a touchdown and added a 60-yard scoring run in the fourth quarter in a 14-0 victory. At the season's end, Bausch became the first Kansas player to appear in the East-West All Star Game in San Francisco. As a track athlete, he won Big Six titles in the shot put, javelin, and pole vault. His Olympic javelin throw of 203 feet 3 1/2 inches clinched the gold medal in the decathlon.

Clyde Scott possessed a rare speed and agility which earned him the silver medal in the 110-meter hurdles at the 1948 Olympic Games in London. And never did that blazing swiftness pay a higher dividend than in the 1947 Cotton Bowl game. Scott's Arkansas Razorbacks were locked in a scoreless tie with Louisiana State University when, in the third quarter, LSU quarterback Y.A. Tittle sent receiver Jeff Odom streaking toward the goal with what appeared to be a certain six points. Seemingly coming from nowhere, Scott caught and downed Odom on the Arkansas one-yard line. The Razorback defense made the first of two magnificent goal-line stands and the game ended, 0-0. Scott had lifted his team from the brink of defeat by making what was perhaps the biggest play of his career. A three-time Southwest Conference tailback in coach John Barnhill's single-wing attack, Scott received consensus All-America recognition in 1948. Scott played his first collegiate varsity football in 1944 and 1945 at the United States Naval Academy. Scott received All-America mention in all but one of his five varsity seasons. He was known universally as "Smackover" Scott, a nickname that came from his hometown - Smackover, Arkansas.

With speed, endurance, size and power, Ollie Matson was the ideal running back. Streaking quickness and demolishing power were his trademarks from the very beginning when he starred in football and track at George Washington High in San Francisco. Matson was the city's gridiron back of the year and a sprint and pole vault champion who anchored relay tandems. Competing nationally before entering college, Matson was timed at 9.6 seconds in the 100-yard dash and 47.0 seconds in the 440-yard sprint. In 1948, Ollie led the City College of San Francisco to a Junior College conference title, then transferred to the University of San Francisco where, in his sophomore year, he averaged 5.5 yards per carry. An injury hampered his efforts as a junior, but the elusive super star returned as a senior and led the Dons to an undefeated record in 1951. He won the "Mr. Touchdown" award scoring 21 touchdowns and finishing as a contender for the Heisman Trophy. He won the silver and bronze medals in the 1952 Olympic Games before turning his efforts to professional football and six All-Pro campaigns while playing for five different NFL teams. Matson later coached high school and college football.