Ray Graves knew he had something special in Carlos Alvarez before seeing him play a varsity game. A Hall of Fame head coach with the Florida Gators, Graves said of Alvarez leading into the 1969 season opener: “He has ability, good hands, and speed, right now he’s one of the best receivers we’ve had.” Alvarez rewarded his coach for the praise by scoring a 70-yard touchdown the first time he caught the ball.

Known as “The Cuban Comet,” Alvarez came to the University of Florida after a stellar high school career in Miami. He fell in love with football at a Miami Boys Club, where the game helped him transition from his Cuban boyhood to American athletics. The Alvarez family fled Cuba in 1960 to escape the reign of Fidel Castro when Carlos was just ten. Homesick, lonely, and unable to speak English, a despondent Alvarez was told by his father: “We’re never going back, so become an American.” Alvarez loved baseball and basketball but seeing how passionate his friends were about football led him to play. “I realized that football and not baseball was the true American sport,” he said.

Alvarez took to the game and formed a lethal duo with quarterback and fellow sophomore John Reaves. They combined for 88 receptions, 1,329 yards and 12 touchdowns during Florida’s 9-1-1 season. He gained 237 of those yards on 15 receptions in the season finale against Miami. The year concluded with a thrilling 14-13 victory over Tennessee in the Gator Bowl, in which Alvarez scored the game-deciding touchdown. Alvarez became the youngest All-American at the time at the age of nineteen, less than ten years after his family relocated.

Injuries robbed Alvarez of much of his speed and his junior and senior seasons were not as productive, but he still managed to set Florida’s career receiving record with 2,563 yards. Alvarez did not play professionally, opting to focus on the law. He graduated from Duke Law School, taught law at Southern Methodist University, and later became a practicing attorney in Tallahassee. “Football prepared me for my career in law by instilling a sense of discipline,” Alvarez said. “The discipline is the ability to do the work you need to do and is really how football helped prepare me.”

Carlos Alvarez was inducted into the College Football Hall of Fame in 2011. 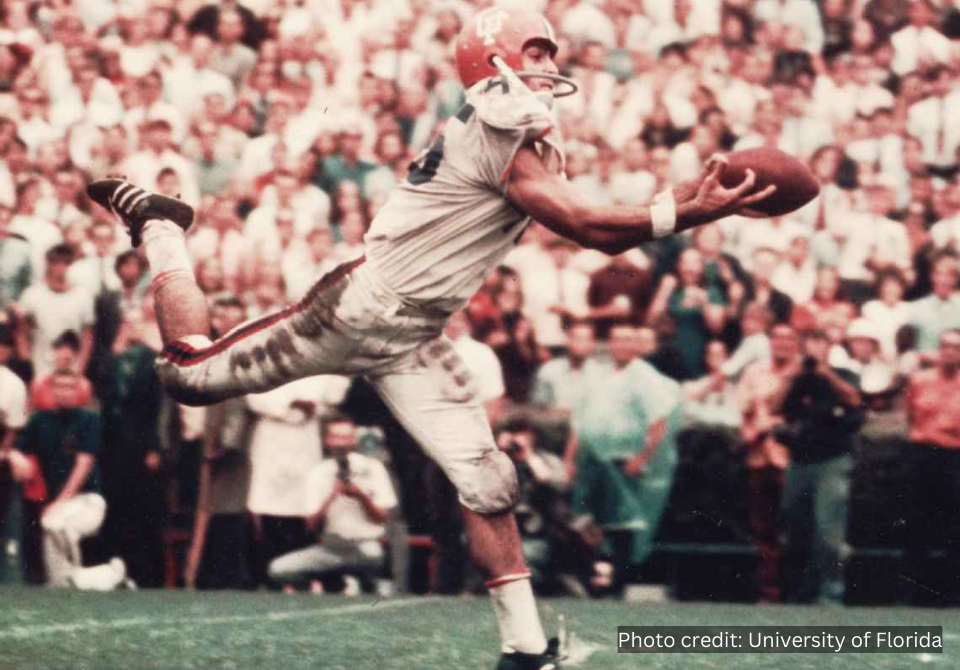