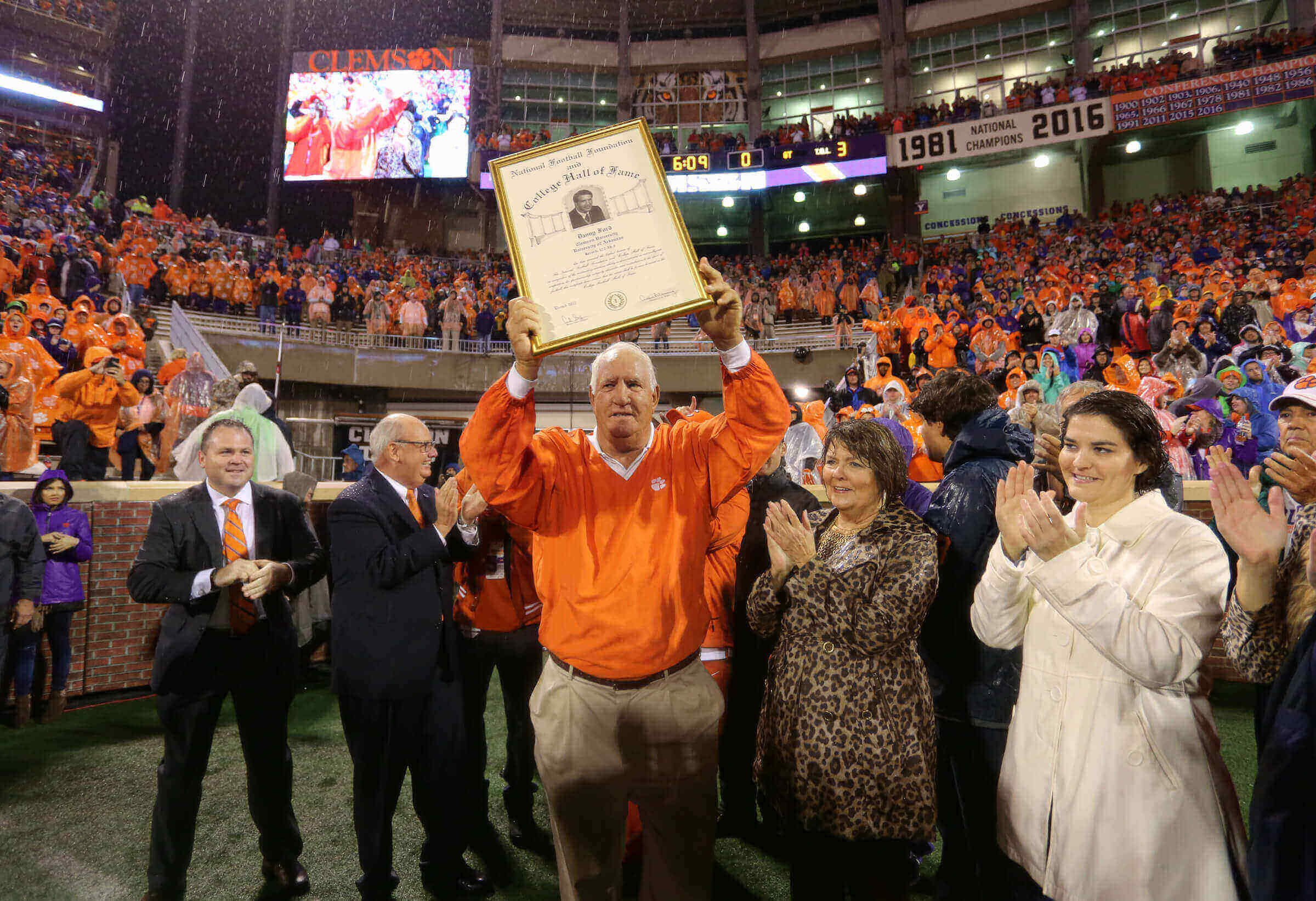 Danny Ford has the distinction of being the youngest head coach to have ever won a national championship. When he beat Nebraska in the 1982 Orange Bowl to capture Clemson’s first national title he was 33 years, and eight months and 30 days old.

Ford came to coaching after spending three years on the Alabama varsity (1967-1969) as a backup tight end and a two-year starter at tackle for the legendary Bear Bryant. After nine seasons as an assistant at Alabama, Virginia Tech and Clemson, he got his opportunity to become a collegiate head coach at the age of 31.

The circumstances surrounding his first game were more than unusual. Clemson head coach Charlie Pell resigned from position on December 4, 1978, to take the head coaching job at Florida. The players then wrote and signed a two page letter to the Clemson Board of Trustees recommending that Ford be given the head coaching job. Ford then had to prepare the team to face Ohio State in the Gator Bowl to be played in Jacksonville 19 days later. There he would face coach Buckeye coach Woody Hayes.

The game would be infamously remembered as the end of the career of one Hall of Fame coach and the beginning of another.  With the Tigers leading 17-15 and two minutes to play, Ohio State found themselves at the Clemson 24 yard line needing just a field goal to take the lead. Under pressure freshman quarterback Art Schlichter threw a pass directly into the arms of Tiger lineman Charlie Bauman ending the threat. When tackled in front of the Ohio State bench, Bauman was grabbed and punched by Hayes. The incident ended a 33 season coaching career that included 238 wins and five national championships.

“It was a thrilling win for Clemson. Some things took something away from the game, but the most important thing was it was big win for us.” said Ford.

Forgotten in the incident is that the 1978 Clemson team would finish the year at 11-1 with a number six national ranking. It was the highest ranking the school had ever received and first time Clemson ever appeared in the final top ten in both polls.

The 1981 season opened with Clemson unranked coming off a 6-5 season. In week three Ford would face 4th ranked Georgia and eventual Heisman winner Herschel Walker. While the offense could manage only 13 points, the Tiger defense forced nine turnovers, including five interceptions in a 13-3 upset. It would be a pattern repeated through the season. Clemson would finish second in the nation in scoring defense and would create 41 turnovers.

Now ranked, Clemson would climb the polls, game by game and week by week – 19th, 14th, 9th, 6th, 4th, 3rd and 2nd as victory followed victory. On the final week of the regular season #1 and undefeated Pittsburgh fell to Penn State and Clemson took the top spot entering the bowl season.

In the Orange Bowl, they would meet 4th ranked Nebraska. Like the Ohio State game, Clemson entered the contest as the underdog despite a higher ranking. The plot of the bowl game much the same as the regular season. The offense led by Quarterback Homer Jordan scored twice and kicker Donald Igwebuike added three field goals. The defense led by Hall of Famers Terry Kinard and Jeff Davis along with freshman William “The Refrigerator” Perry held the Huskers to 15 points and forced eight three and outs of Nebraska’s 12 possessions.

A copy of the letter written and signed by his players that asked that Ford be given the full-time job reappeared as Danny was about to enter the Hall of Fame. The author, Michael Brown kept the copy for nearly four decades convinced that one day Ford would enter the Hall of Fame. This past January, he died of cancer, before the announcement was made that Ford was elected to the Hall. But his two sisters found the letter among Michael’s keepsakes. Today the framed letter is in the Ford home.

To learn more about Legends like Danny Ford, come visit the College Football Hall of Fame.