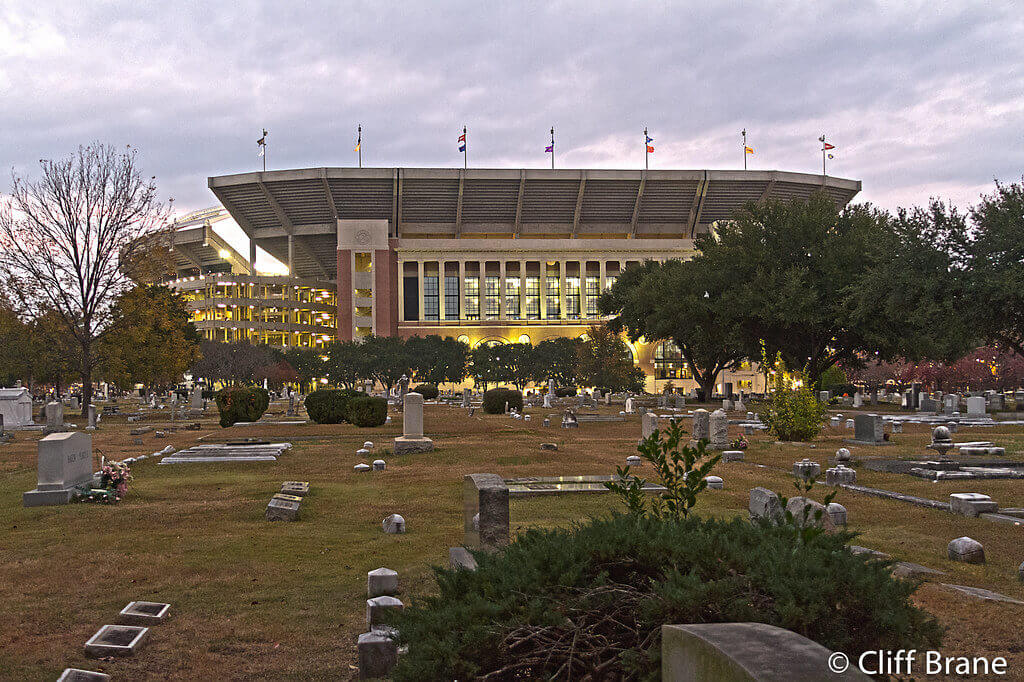 Over the course of 150 years, the sport of college football has seen its fair share of haunting stories and mysterious occurrences. This October, the Chick-fil-A College Football Hall of Fame shares four of the spookiest tales that still haunt the game today.

If you roll with the Tide, you may have heard the story of an undertaker and his wife buried at Evergreen Cemetery across from Bryant-Denny Stadium. Rufus Strickland, a local coroner, purchased a family plot in the cemetery to ensure he could cheer on his beloved football team for all eternity. His wife passed away first and was buried on the side of the plot closest to the stadium. According to Alabama legend, her body was mysteriously moved to the other side of the plot and many believe Rufus moved her so he could be buried between the two loves of his life: His wife and The Crimson Tide. Perhaps he knew that the mystery would grow into a legend, because he left a message to future fans visiting his grave. His headstone reads; “Hi, thanks for stopping by”.

On Saturdays in the fall, Camp Randall Stadium erupts with cheers from Wisconsin Badger fans rooting for their team. However, long before the stadium was built, the land was a training ground for Union Soldiers during the Civil War and there was also a prison for Confederate soldiers nearby. Badger fans who tailgate near the stadium say they’ve seen the ghosts of Confederate soldiers wandering inside the stadium on chilly game day mornings. The soldiers appear dressed in Civil War-era uniforms wearing slings and bandages for their injuries.

The Ghastly Ghost of Notre Dame

It was a cold, pitch-black night in December 1920 when, after a late night out celebrating his final football game against Northwestern University, George Gipp, a halfback for the University of Notre Dame, missed curfew and found the doors to his dormitory, Washington Hall, locked.  Rather than sneak in and risk getting caught, he decided to sleep outside. This decision likely led to his death as he contracted pneumonia and later died from complications. Gipp, nicknamed “the Gipper”, played under legendary Coach Knute Rockne from 1917-1920. On his death bed, Gipp made his famous plea to Coach Rockne, asking him to tell the team “to win just one for the Gipper.” It’s been a rallying cry for the team ever since.

Not long after the Gipper’s death, the students who lived in Washington Hall started to experience signs of a paranormal visitor. They reported hearing strange noises, like papers rustling under doors, music being played late at night, phantom footsteps and even horns going off without warning. The Gipper’s spirit is still said to linger in the music hall on campus today and occasionally spook students.

The Chick-fil-A College Football Hall of Fame invites all ghastly ghouls, gridiron ghosts and zombie cheerleaders alike to visit during Haunted Hall of Fame on October 26 and 27. You won’t want to miss the spooky fun!