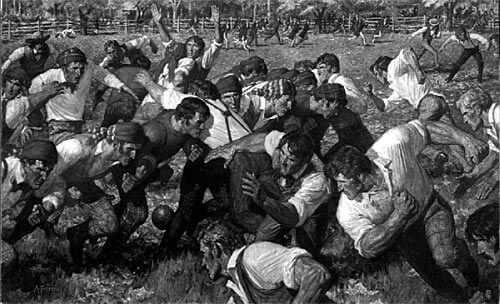 This exciting, albeit tricky to pronounce term describes the upcoming college football season and momentous 150th anniversary for our beloved sport. Few sports can claim such a remarkable history. Professional leagues such as the NBA, NHL and NFL only began in the 20th century, and you may be surprised to learn that even the MLB, Crew and Modern Day Olympics are younger than collegiate football. On November 6, 1869, Rutgers and Princeton faced off in the first official college football game. With a mere 100 fans estimated in attendance, Rutgers beat Princeton 6-4. A week later, thirsty for revenge, Princeton dominated Rutgers with a final score of 8-0. Over the past 150 years, much has changed regarding the rules of the sport and the unrivaled culture it has established.  The early game looked more like rugby or soccer.  Teams were allowed to play with 25 players on the field and from there all facets of the sport including field length, scoring and ball size and shape evolved into the game we now all know and love.

Despite the changing rules, look and strategy of the game, the passion and traditions surrounding it have only strengthened, creating a culture that stretches far beyond Saturdays in the fall. One hundred fans on wooden bleachers have become 100,000, selling out stadiums, with millions more watching on TV. College football has created some of the most defining moments in not only sports, but also life. It shows us that the bitterest of rivalries can co-exist peacefully on and off the field, the game can rally communities through highs and lows and bring hope and passion to people when it seems impossible.

With less than 150 days remaining until college football’s big day and even fewer before the kickoff of the 2019 season, teams in every division across the nation are hitting the gym for their summer workouts, cheerleaders are perfecting their routines in camp, bands are dusting off their instruments, and fans are getting their face paint and tailgate setups ready. This is sure to be another memorable and competitive season of football and there is no better place to celebrate college football’s sesquicentennial than the Chick-fil-A College Football Hall of Fame, where every day we honor the people, passion and traditions of the game.