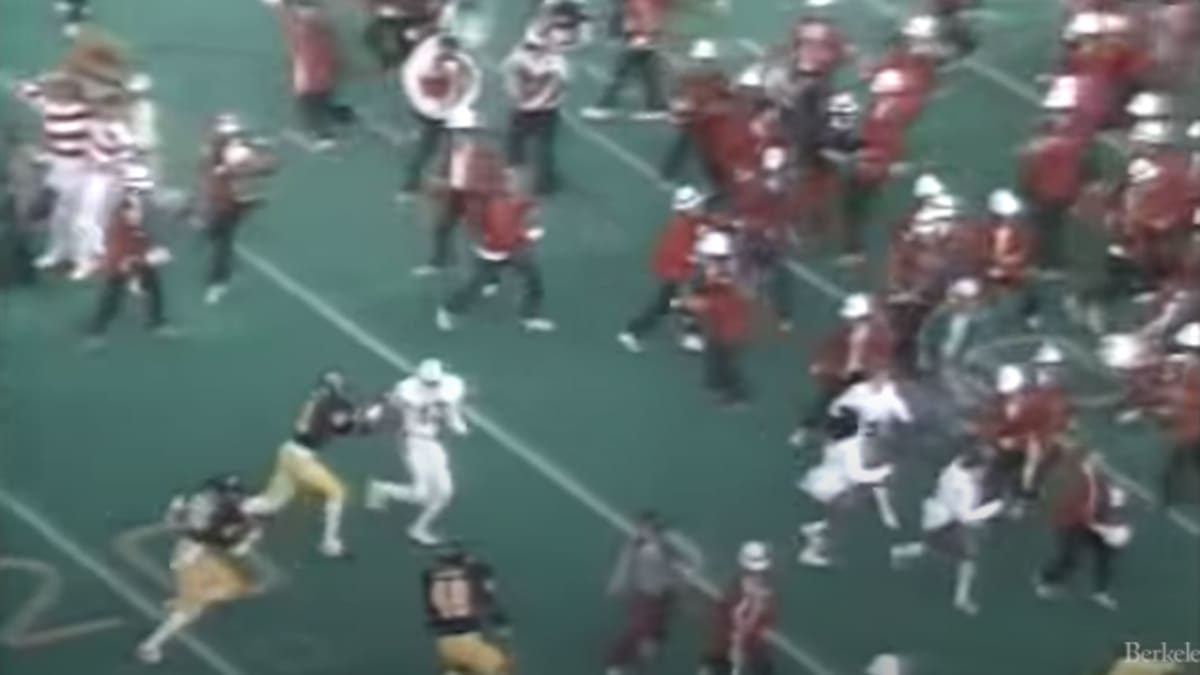 College football has seen some historically ridiculous plays, good and bad. Here are some of the latter.

Yet no matter how often and how intently this cycle is repeated there’s always the potential for something unplanned to happen.

Here are five such examples (plus a bonus) of plays that are more worthy of the blooper reel than the highlight reel (While it may look like we’re picking on Cal, please rest assured that we are not.).

The Missing Ball Trick: “The Big Game” between Cal and Stanford has been played 124 times but get the series going – at least the inaugural matchup on March 19, 1892 – took awhile.

The delay came because Cal’s manager forgot to bring the game ball.

According to legend, a local sporting goods store merchant rode by horse to his store and got one – or something close – only delaying the start a couple of hours. The day did not get much better for Cal, as Stanford won the game, 14-10.

That day probably wasn’t even the manager’s worst day, as that student-manager, Herbert Hoover, would become the 31st President of the United States and was in office when the U.S. fell into “The Great Depression.”

The Marching Band Refused To Yield: Football is a 60-minute game and you need to play ALL 60 minutes before celebrating. The same goes for the band.

The Leland Stanford Junior University Marching Band, found that out in the 1982 Big Game.

It was hard to blame them. Stanford quarterback John Elway (College Football Hall of Fame Class of 2000), playing his final collegiate game, had just led the Cardinal to the go-ahead drive, capped off by a 35-yard field goal by kicker Mark Harmon – no, not THAT Mark Harmon – for a 19-17 lead with only four seconds left.

All Stanford had to do was keep Cal out of the end zone on the kickoff.

Then “The Play.” happened. (Here is the legendary call of Cal announcer Joe Starkey.).

Harmon’s squib kick was fielded by Cal’s Kevin Moen at his 46.

Five laterals later – Moen to Richard Rodgers (no, not THAT Richard Rodgers) then to Dwight Garner (who the Stanford side still insists was down), back to Rodgers, to Mariet Ford, and finally back to Moen – the Golden Bears were in the end zone, giving the Golden Bears the 25-20 victory. Moen navigated the final 25 running over Stanford trombonist Gary Tyrell in the back of the end zone.

Ute Got To Be Kidding!: Just as it’s important to play all the way through a football game to win, you need to get all the way into the end zone with the ball, or at least break the plane, to score. The 20th-ranked University of Utah learned all about breaking the plane – or NOT breaking it – against No. 5 Oregon on Nov. 8, 2014. Already up 7-0, Utah quarterback Travis Wilson opened the second quarter by dropping back and, from his own 12, connecting down the middle with wide open Kaelin Clay, who’d gotten behind the defense.

But while the receiver, sans football, and teammates celebrated in the back of the end zone and Rice-Eccles Stadium erupted, the side judge, standing at the goal line, did not raise his arms.

Seeing that, Oregon free safety Erick Dargan picked the ball up and started running but had the ball stripped by a Utah player. Linebacker Joe Walker picked it up and took off in the other direction, with a flock of Ducks. Once he reached the end zone, ball in tow, the head linesman, following the Oregon relay, threw his arms up, signaling touchdown.

Upon further review, Clay had discarded the ball at the Oregon 2. The Oregon TD stood and instead of leading 14-0, Utah was instead tied. The Ducks scored 17 more unanswered points in the quarter on the way to a 51-27 victory. They’d win the Pac-12 North and earn a berth in the inaugural College Football Championship.

Learning Right From Wrong: Returning a fumble for a touchdown is every defensive lineman’s dream. Cal center Roy Riegels – he also played nose guard on defense – thought he was living his, during his fumble recovery early in the second quarter of the 1929 Rose Bowl against Georgia Tech.

With the game scoreless, Riegels picked up a fumble by Yellow Jackets running back “Stumpy” Thomason started toward the Jackets goal line, then reversed field and took off in the other direction, unaware it was the wrong one.

Riegels’ apparent dream turned into a nightmare when Lom caught him at the 10 and got him to turn around. But by then, several Yellow Jackets had caught up and brought Riegels down inside the 5. Cal chose to punt on first down but Lom’s punt was blocked out of the end zone for a safety. That would be the margin of victory, in Tech’s 8-7 win.

Riegels never shook the nickname, “Wrong Way” but did earn All-America honors the next season, induction into the Rose Bowl and University of California halls of fame and even used his experience as a teaching moment for others who’d made errors similar to his, writing them letters of encouragement.

"I gained true understanding of life from my Rose Bowl mistake," he said in an interview with the Pasadena Star. "I learned you can bounce back from misfortune."

The play was named one of the “Most Memorable Moments of the Century” in 2003 by a panel from the College Football Hall of Fame and CBS Sports.

Fifth-Down: You need a little luck to win a National Championship. The 1990 Colorado Buffaloes certainly had some, notably at the end of their Oct. 6 game at Missouri, which the No. 12 Buffs escaped, 33-31.

On this day that luck came from an unexpected source, the sideline officials in charge of downs.

Colorado’s winning drive started at its own 12, with a little less than 2:30 left. With 31 seconds remaining, quarterback Charles Johnson, playing for injured starter Darian Hagan, had the Buffs at first and goal from the Missouri 4. Here is the final series of plays. You do the math.

Colorado, which actually dropped to No. 14 in the following week’s poll, finished 11-1-1 and earned a share of the National Championship with Georgia Tech. Bieniemy, who rambled for 217 yards on 29 carries in the game, finished third in Heisman voting behind BYU’s Ty Detmer (College Football Hall of Fame Class of 2012) and Notre Dame’s Raghib “Rocket” Ismail (Class of 2019).

That game wouldn’t be Colorado’s last bit of good fortune via officials that year. In the Orange Bowl, a questionable clipping call on a punt return for a score by Ismail in the game’s final minute preserved CU’s 10-9 victory. That flag also kept Colorado punter Tom Rouen – who for some reason punted to Ismail and not out of bounds – from qualifying for this blog.

Back To the Drawing Board: “Flipping the field” isn’t usually part of a “goal-to-go” offensive package.

On probably the wildest second-and-goal play you’re ever going to see, a wild snap past La. Tech QB J’Mar Smith, resulted in a series of bumbles and stumbles resulting in an 87-yard loss, setting up third and goal, 93 yards away.

Not exactly the way they drew it up in the playbook.

Two plays later Tech punted on fourth-and-goal from its 28.