The Power of HBCU 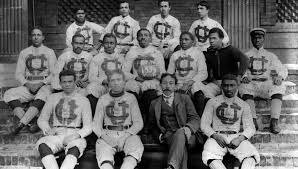 December 27, 1892, started out as a typical snowy day, two days after Christmas on the campus of Livingstone College in Salisbury, North Carolina.

By the end of the day, college football was changed forever.

What happened in between was students from Biddle College (now Johnson C. Smith University in Charlotte, NC) and Livingstone lining up to play football. They had no idea what would result from their game and certainly no intention of making history.

It was said that Biddle College needed two years to study the game of football, before suiting up to play, while Livingstone’s squad was formed that year. The game was informal, to say the least. Women in Livingston’s industrial department made their side’s uniforms (Biddle bought theirs), the players fastened cleats to the bottoms of their regular shoes to gain traction on the frozen, slippery ground and the teams had to chip in to buy a game ball.

Blackamericaweb.com described the game – as well as the first-ever controversy – as follows:

“The teams played two 45-minute halves on Livingstone's front lawn. W.J. Trent scored Livingstone's only touchdown on a fumble recovery. By then the snow had covered the field's markings and Biddle argued that the fumble was recovered out of bounds.

The official ruled in Biddle's favor, allowing them to keep the 5-0 lead that they had established early on and giving the visitors the victory.”

Much like when Princeton and Rutgers met in the first college football game, back on Nov. 6, 1989, Biddle-Livingstone opened a brand-new world! (The site of the game is still commemorated).

The game has come a long way.  The change began with the formation of all-black colleges (the first recognized university was Cheyney University of Pennsylvania on Feb. 25, 1837).

The term Historically Black Colleges and Universities (HBCU) was established in 1965 as part of the Higher Education Act of 1965. Today there are 101 schools under the HBCU umbrella.

Despite lesser resources compared to more notable D-I programs, HBCUs not only played but thrived!

They still do and continue to put on incredible displays of often-innovative football, which are played and coached by some of the best players and coaches to take the gridiron Anywhere.

A breakthrough came in 1968, when Yankee Stadium in the Bronx, N.Y., hosted the game between Grambling and Morgan State. It was the first game featuring two HBCUs to be held in New York City. The game, known as the Urban League Classic, is still being played. On Sept. 24, 1976, HBCU football went worldwide, as the Tigers and Bears played the first game overseas, playing in Tokyo’s Korakuen Stadium. During the ‘80s, Robert Johnson’s BET helped spread the word, by broadcasting HBCU games, and this past year, ESPN put on some 39 games.

The 2021 season climaxed with a big-time, sponsored championship game, the Cricket Celebration Bowl, played between the South Carolina State Bulldogs, champion of the Mid-Eastern Athletic Conference (MEAC), and Jackson State Tigers, champion of the Southwestern Athletic Conference (SWAC). The game was held at Mercedes-Benz Stadium in Atlanta, in front of 48,653, and televised on a major network (ABC). The Bulldogs won the game, 31-10.

The 2022 Cricket Celebration Bowl shone maybe the brightest national spotlight HBCUs have ever seen and, while a great deal of that spotlight was directed at JSU’s first-year head coach, Deion Sanders, the coverage couldn’t help but shed some light on the tradition and history of HBCU football and some of the remarkable teams and remarkable players coached by remarkable men.

In every sport there are always teams that set themselves apart, some reaching a legendary level. Here are a few powerhouses on the HBCU level.

In addition, FAMU avenged the ‘62 loss to Jackson State in 1978, as part of Coach Rudy Hubbard’s second of back-to-back FCS crowns – additionally, in 1979, they’d take a big step forward for HBCUs by stunning Miami, 16-13.

Of course, these players barely scratch the surface of HBCU greats and only include College Football Hall of Famers.

As HBCUs fought for acceptance and recognition, it was impossible to ignore the greatness of some of the coaches, whose teams dominated for decades and created the fierce rivalries that continue today.

As with players, there are so many other amazing coaches that have worked their magic on the sidelines for HBCUs. Among them are Morgan State’s Earl Banks (College Football Hall of Fame class of 1992), Jackson State’s W.C. Gorden (Class of ‘08), Hampton’s Joe Taylor (Class of ‘19) and FAMU’s Rudy Hubbard (Class of ‘21) and others who belong and should someday make it, like Rod Broadway (North Carolina Central, Grambling) and “Buddy” Pough (South Carolina State).

Sanders, while in the Hall, as a player, of course (Class of ‘11), is not yet on the level of these legendary coaches – he probably learned some valuable lessons by matching wits with Pough in the Celebration Bowl – but he’s among the exciting new names among HBCU coaches. Included in that wave of new young coaches who are well-known and known as winners, like 1995 Heisman Trophy winner Eddie George (also in Sanders’ ‘11 HOF class), and Michigan star running back Tyrone Wheatley.

The buzz from these names, as well as from the televising of the Celebration Bowl is leading to a spike in popularity for HBCU football. Not only are fans noticing – HBCUs drew a crowd of 48,653 in 2021 – but so are high schoolers.

Cornerback Travis Hunter Jr., the No. 1 recruit nationally, transferred from Florida State, Sanders’ alma mater, to JSU, Sanders’ program, after having already turned away the likes of national champion Georgia, Alabama, Auburn, Clemson, Florida, Oklahoma, Texas, and a host of other Power 5s. Others are sure to follow via NILs or the transfer portal.

Grambling’s and other SWAC schools’ revolutionary policy regarding NILs (Name, Image, Likeness) contracts for recruits also is a sweetener – one that is being closely watched by FBS and other FCS schools. But that’s a subject for another day.

It may be a long time coming, but HBCUs have good reason to believe that their day in the sun is coming…and soon!