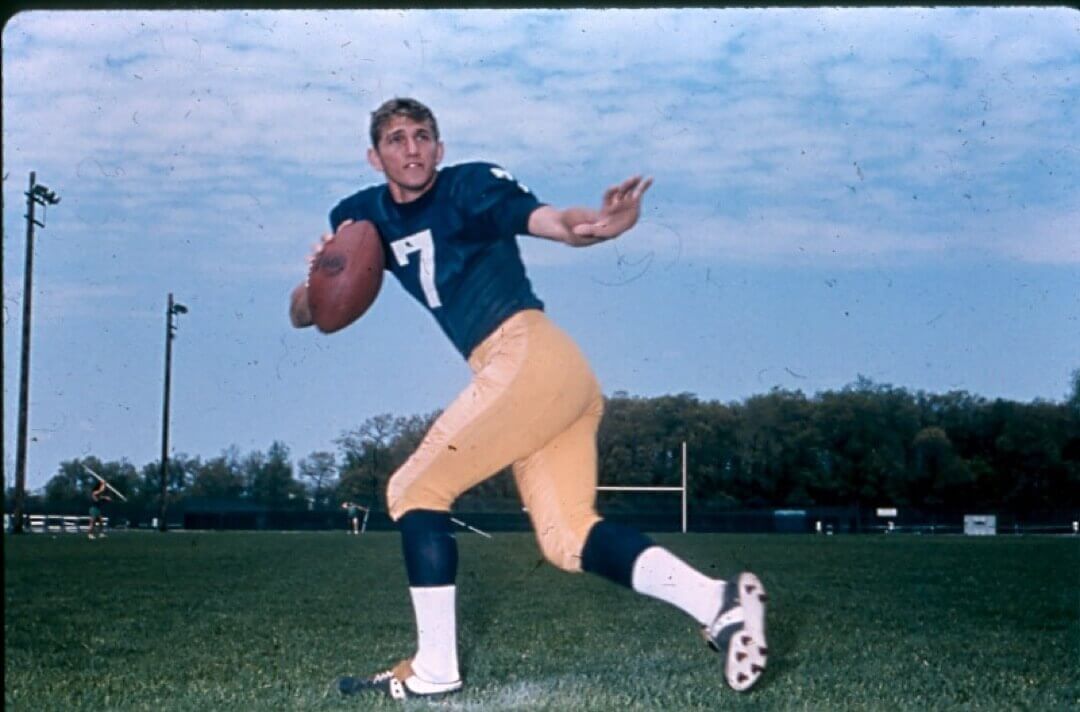 The Fighting Irish
Since 1887, the University of Notre Dame has embodied a rich football tradition. Of all the schools represented in the College Football Hall of Fame, Notre Dame has the largest number of inductees with 53. In recognition of St. Patrick’s Day, we’re highlighting four of the most notable Fighting Irish players and coaches.

Joe Theismann
Quarterback, 1968-1970
Hall of Fame Class of 2003
Joe Theismann took over the Irish offense as a sophomore after starting QB Terry Hanratty was sidelined by injury. During Theismann’s junior year, he helped lead Notre Dame to their first bowl appearance in 44 years, ending a self-imposed bowl hiatus. Despite a close loss against the top ranked Texas Longhorns in the Cotton Bowl, Theismann entered his senior year as one of the top players in the country. Before the start of the season, Theismann, whose last name was actually pronounced THEES-man, was encouraged by Notre Dame publicity man Roger Valdiserri to change the pronunciation of his name to rhyme with "Heisman". Theismann went along with the idea and led Notre Dame to a 10-1 record, a #2 national ranking, and a revenge victory over Texas in the Cotton Bowl. As for the Heisman, he finished second to Jim Plunkett of Stanford University.
Theismann achieved many accolades during college career, including First-Team All-America and Academic All-America selections. He finished his career with a 20-3-2 record while throwing for 4,411 yards and 31 touchdowns, and set school records for passing yards in a game, yards in a season, and touchdowns in a season.

Following college, he had a 12-year NFL career with the Washington Redskins. He led them to a Super Bowl victory in 1982 and was named league MVP in 1983. 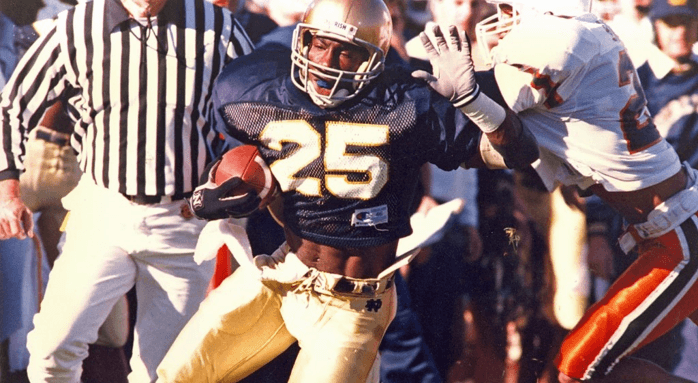 Raghib “Rocket” Ismail
WR/KR, 1988-1990
Hall of Fame Class of 2019
Remembered as one of the most explosive players in college football history, Raghib “Rocket” Ismail put fear into Notre Dame opponents every time he touched the ball. As a freshman in 1988, he helped lead Notre Dame to an undefeated national championship season with memorable plays against #1 Miami in October and undefeated West Virginia in the Fiesta Bowl. In 1989, Ismail had one of the best performances ever for a kick returner with two stunning kickoff returns against #2 Michigan in Ann Arbor. Rocket finished his illustrious career at Notre Dame with a record of 33-4. He is one of two Notre Dame players to gain more than 1,000 yards rushing and receiving in a single career. Thirty years later, his 22-yards per reception average record is still intact at Notre Dame and he remains the only player in history to return two kickoffs for touchdowns in two different games.

Rocket was projected to be the number one overall pick in the 1991 NFL Draft, but opted to sign with the Toronto Argonauts of the Canadian Football League instead. He led them to the 1991 Grey Cup Championship, and eventually made his way to the NFL, where he played for the Los Angeles Raiders, Carolina Panthers, and Dallas Cowboys. 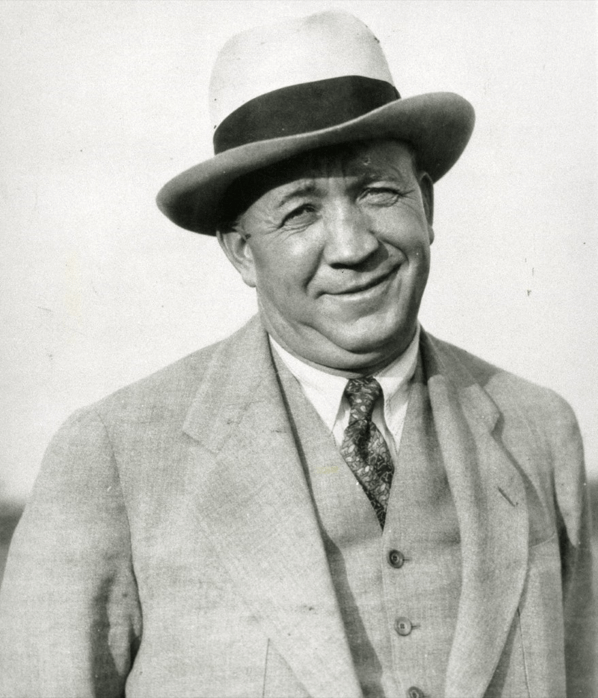 Knute Rockne
Coach, 1918-1930
Hall of Fame Class of 1951
Known as one of the greatest college football coaches to ever coach the game, Knute Rockne’s name is cemented in Notre Dame history. His career winning percentage of .881 still ranks as the highest in major college football history. He brought his teams to five undefeated seasons and six other seasons with only one loss. As head coach, Knute’s teams won three national championships, and from 1918 to 1930, his teams were 105-12-5. Rockne’s stylish players coupled with his electric personality captured the public’s imagination during the Golden Age of sports in the roaring twenties. The Irish were featured on newsreels throughout the country, securing their place on the national stage.

Rockne perfected the “Notre Dame Shift”, which helped transform the game from a sport of brute strength to one of speed and swift agility. His style of play was adopted by numerous teams and six of his players became Hall of Fame coaches. He coached legendary players including George Gipp, Rip Miller, and the legendary “Four Horsemen of Notre Dame”: Harry Stuhldreher, Jim Crowley, Don Miller and Elmer Layden. 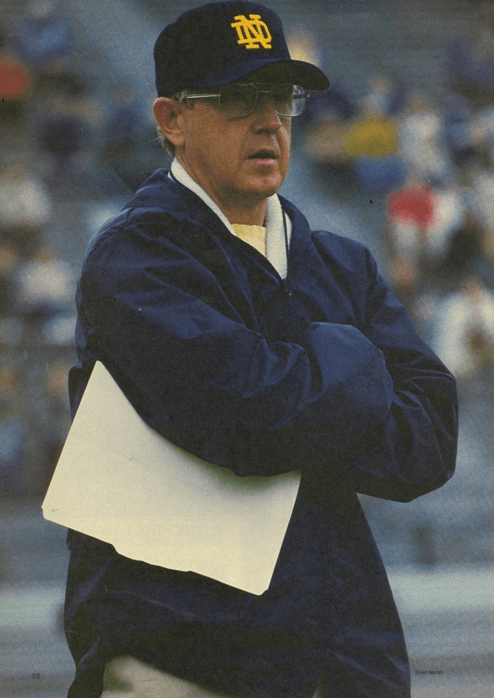 Coach, 1986-1996
Hall of Fame Class of 2008
Coach Lou Holtz is best known for his 11 seasons at Notre Dame where he led the Irish to the 1988 National Championship and captured 100 wins. Shortly after joining the Irish, Holtz removed his players’ names from the back of their jerseys to motivate his team and prioritize team effort. The tradition has lived on, with names included on the backs of Notre Dame jerseys only in select bowl games.

Holtz is the first coach in NCAA football history to lead six different programs to bowl games and the only coach to guide four different programs to final top 20 rankings. From his success on the field, he became a fixture in the college football landscape for more than three decades. Personally, he earned Man of the Year recognition from the Walter Camp Foundation in 1997, and he twice earned the American Football Coaches Association Academic Achievement Award, which annually honors the school with the highest graduation rate among members of its football team.