Jeff Garcia was rarely anyone’s first choice, but he always made the most out of the opportunities he earned. An All-County quarterback in high school, he enrolled at Gavilan College, a community college in Gilroy, CA. He played at Gavilan for one year under his father Bob Garcia. Football was a Garcia family business. In addition to his father, Garcia’s uncles had been players and coaches at San Jose State.

After being named All-Coast at Gavilan, Garcia went to San Jose State. He redshirted in 1990 and backed up Matt Veatch in 1991 until the latter was injured. In Garcia’s first collegiate start, he passed for five touchdowns in a 55-12 rout of UNLV and was named Big West Conference Player of the Week. Garcia won the starting job outright in 1992 and led the Spartans to an upset victory over Minnesota. His late game heroics gave the Spartans the field position needed to make a game-winning field goal as time expired against Wyoming. He was named All Big West after leading the Spartans to an average of 30 points per game.

Garcia graduated as the Spartans all-time leader in total yards. NFL teams did not think him worthy of a draft choice, even after passing for three touchdowns and rushing for the deciding two-point conversion in the 1993 East-West Shrine Game. Garcia signed with the Calgary Stampeders of the Canadian Football League and backed up Doug Flutie. When finally given a chance to start, Garcia led the Stampeders to the 1998 Grey Cup title.

He signed with the San Francisco 49ers in 1999 and was again relegated to backup duty. When Steve Young was injured, Garcia stepped in and took control of the offense for the next four years. He led the 49ers to playoff appearances in 2001 and 2002, including an epic 25-point fourth quarter comeback to defeat the New York Giants 39-38.

Garcia played in the NFL until 2011. He is enshrined in the San Jose State Sports Hall of Fame. San Jose State’s Athletics Department is housed in the Jeff Garcia Hall of Champions. 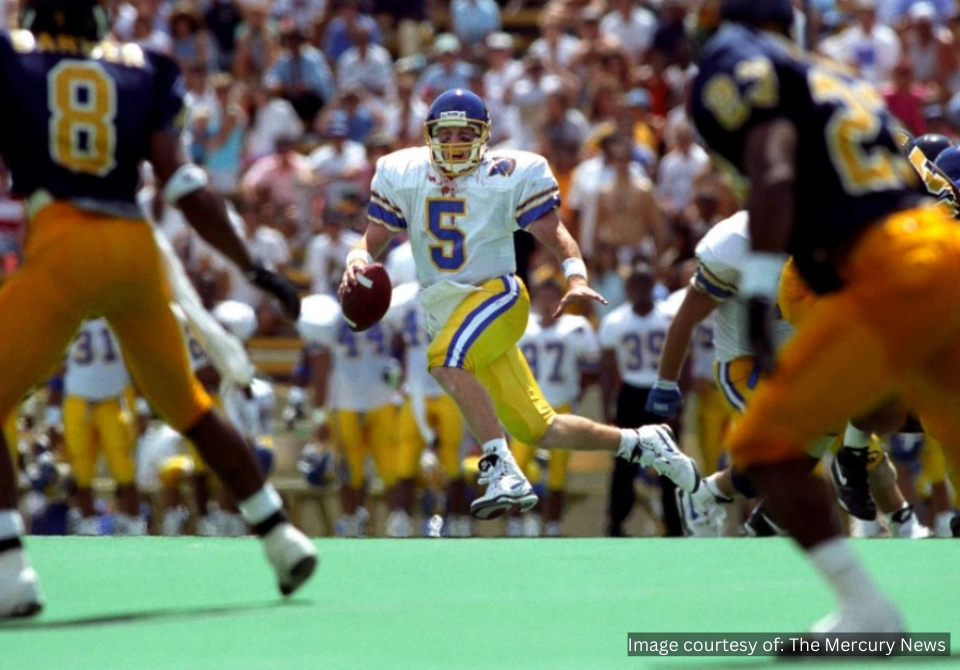