Cam Newton burst onto the scene at Auburn in 2010. The 6’ 6” transfer from Blinn College (TX) had spent a couple of seasons at Florida before making the move to junior college. After leading Blinn to the NJCAA Championship, Newton made up for lost time on the Plains.

Newton won the 2010 Heisman Trophy, scoring 51 total touchdowns: 30 passing, 20 rushing, and one receiving. His Heisman bona fides were burnished through his habit of rallying the Tigers from deficits throughout the season on their way to the SEC title. Auburn rallied from deficits in eight of their thirteen games to finish 13-0. None of these comebacks were as impressive as the season finale against arch-rival Alabama. Newton and the Tigers spotted the Crimson Tide a 24-0 lead before racing back to win 28-27.

The BCS Title Game in Glendale, AZ would be more of the same, only the comeback was spurred by an unlikely Tiger who stood seven inches shorter than Newton and came within an eyelash of missing out on one of the most memorable plays in the history of college football.

Auburn was matched with undefeated Oregon. Ducks head coach Chip Kelly’s offense averaged just under 50 points per game and running back LaMichael James led the nation in rushing (1,731), won the Doak Walker Award, and finished third in the Heisman voting.

The game was a surprising defensive struggle. There was no score after the first quarter and Auburn managed only 21 yards of offense. Newton was under constant pressure as the defensive ends of Oregon crashed from the outside and cut off his ability to scramble. Early in the second quarter Tiger freshman running back Michael Dyer, a 5’9,” 215-pound “sledgehammer” in the words of Alabama sportswriters, began penetrating the middle of the Duck defense.

Dyer’s ability to earn tough yards up the middle in three to five-yard chunks gave Newton’s play fake bite. Freed from the pass rush, Newton had the time to hit Kodi Burns on a 35-yard touchdown pass. Oregon answered on James’ eight-yard touchdown reception from QB Darron Thomas, putting the Ducks up 11-7 following a successful two-point conversion. Moments later, however, James was tackled by Auburn in his own end zone for a safety to cut the lead to 11-9. Newton, again benefiting from the running of Dyer, was able to hit another long scoring pass. This time it was a 30-yarder to Emory Blake right before halftime to give the Tigers a 16-11 lead at intermission.

The third quarter reverted to a defensive struggle with the only scoring coming on a 28-yard field goal by Wes Byrum. That extended the lead to 19-11. Oregon had one legitimate scoring opportunity, but Auburn stood firm on a fourth-and-goal from the one-yard line to take possession back.

The lack of offense continued into the waning moments of the fourth quarter when Oregon forced Cam Newton to fumble and recovered at the Auburn 40 with just over five minutes remaining. Held in check for most of the game outside of a touchdown reception, LaMichael James again got in position for a short touchdown reception, this time two yards. The score made it 19-17 with 2:33 remaining and the Ducks successfully made the two-point conversion to tie the game.

Auburn did not want to risk another turnover, so they elected to keep the ball on the ground thinking the worst outcome would be overtime. Dyer had a different idea. He popped through the line and gained six yards before he was dragged down by Oregon safety Eddie Pleasant. Dyer never hit the ground, however. He landed on Pleasant and popped right back up, looked around briefly and realizing the referee whistle had not blown, continued running for another 30 yards before being tackled near the Oregon 20. “I didn’t hear a whistle and I was looking at them (referees) like, what’s going on,” Dyer said after the game. “The team was yelling for me to come on. So, I took off.”

While everyone on the Oregon sideline, the state of Oregon, and possibly the entire Pacific Northwest yelled that Dyer was down by contact, the officials went to replay and did not find conclusive video evidence to overturn the call. While Dyer’s shin came close to touching the ground it did not. Also, while his wrist came very close to the ground, he managed to put his palm down first.

A deflated Oregon defense could not put up much resistance and Dyer and the Tigers moved down the field. It appeared Dyer scored on a 17-yard touchdown to win the game, having again used the body of a prone Eddie Pleasant to keep from hitting the ground. This time replay clearly showed his knee on the ground at the one-yard line. With only two seconds to play it came down to Wes Bynum to hit a field goal shorter in distance than an extra point. Bynum obliged, and Auburn left the field with a 22-19 victory and their first national championship since 1957.

To his credit, Eddie Pleasant answered questions about the near-tackle post-game. “He just rolled off my chest and everybody stopped,” he said. “The (Auburn) coaches just told him to keep running, and that was it from there.”

Cam Newton’s 2010 season was magical, but his performance in the BCS Championship  Game was overshadowed by his smaller teammate. When asked about some of the big hits and struggles he experienced during the game, Newton smiled and said: “I’m okay. It was worth it.”

Michael Dyer and the rest of Auburn certainly thought so, too.

The 2011 BCS National Championship Game matched the Auburn Tigers against the undefeated Oregon Ducks. Chip Kelly’s offense averaged just under 50 points per game and running back LaMichael James led the nation in rushing (1,731), won the Doak Walker Award, and finished third in the Heisman voting. Auburn

Cam Newton burst onto the scene at Auburn in 2010. The 6’ 6” transfer from Blinn College (TX) won the 2010 Heisman Trophy, scoring 51 total touchdowns: 30 passing, 20 rushing, and one receiving. The Tigers faced off against an undefeated Oregon Ducks team, who’s offense averaged just under 50 points per game. 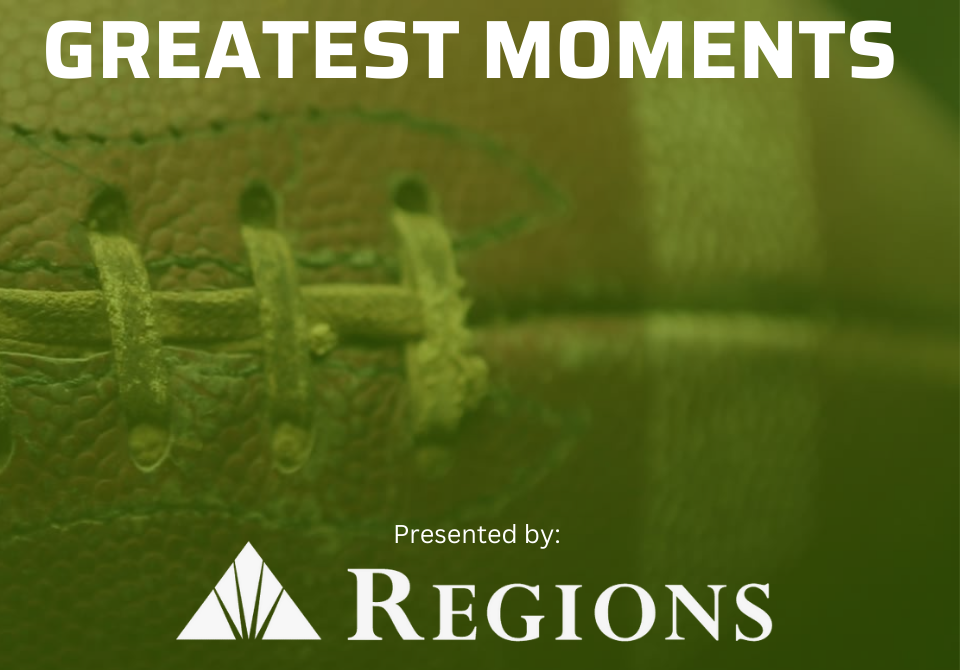