Everything You Need to Know About the MacArthur Bowl 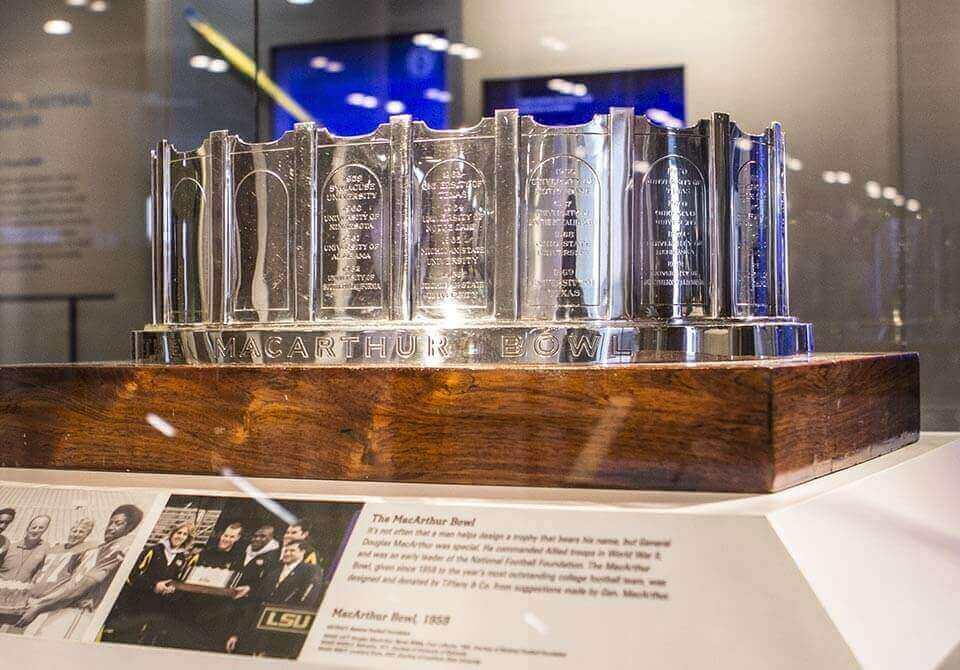 The MacArthur Bowl is one of the most prestigious national honors a team can achieve. Presented annually since 1959 by the National Football Foundation (NFF) to the top football team in the nation, this stadium-shaped trophy is 400 ounces of Tiffany & Co. silver and 25” x 18” in size. Inscribed on the trophy is the famous General Douglas MacArthur quote, “There is no substitute for victory.”

In 1944, General MacArthur sent a telegram to the Army football team congratulating them on their big win against Navy. It read, “The greatest of all Army teams. We have stopped the war to celebrate your magnificent success.” It was during these years that General MacArthur became enamored with the kind of men that were fighting for him during World War II. He noticed that the men who fought for him, who garnered his respect, often came from Army.

Three years later in 1947, General MacArthur founded the NFF with the help of Earl Blaik, the famous Army football coach, and Grantland Rice, the sportswriter who coined the famous Notre Dame backfield “The Four Horsemen.” The three of them would create the NFF, the College Football Hall of Fame and their very own national championship trophy, the MacArthur Bowl.

These national champions are etched into the outer edge of the trophy, and with the exception of two years (1966 and 1970), there is only one MacArthur Bowl winner each year. The emergence of the College Football Playoff has assured that there will be no more debates as to who the national champion is.

The MacArthur Bowl’s permanent home is the Chick-fil-A College Football Hall of Fame. This priceless artifact leaves its protective case only twice a year. Once when it is being inscribed with the new national champion and again when it is presented in a ceremony at the Hall to the winning team.

Congratulations to the Clemson Tigers and their fans on winning the MacArthur Bowl and an amazing 2018-2019 season.