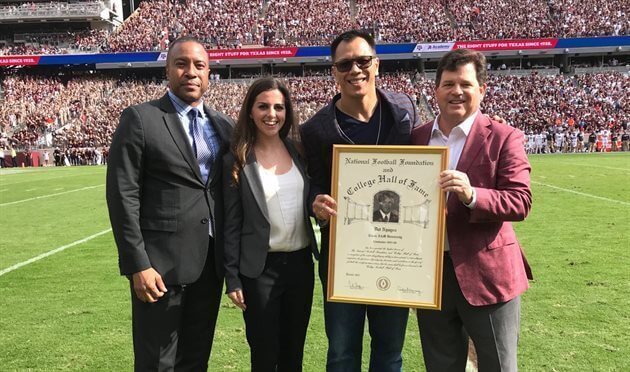 You often hear of the three F’s: faith, family and football. Few Hall of Famer’s exemplify those three better than Hall of Fame linebacker Dat Nguyen.

On April 25, 1975, Dat’s father, four-month pregnant mother, their five children and forty other family members escaped the invading Viet Cong from the small Vietnamese fishing village of Bin Da. During the midnight run south through the woods, the family could hear and feel bombs detonating around them as they fled to the awaiting recuse boats.

The family made its way to the Fort Chaffee, Arkansas, refugee camp where Dat was born five months later on September 25, 1975. The family then moved to Rockport, Texas a small fishing town northeast of Corpus Christie. The irony of their new home was that when translated, their former home of Bi Da means Port of Rock. There they resumed their lives in the shrimping business. Dat’s father later started a supply business to the industry, while his mother opened a restaurant.

Despite his family’s concerns, Dat began playing football in the eight grade. “I fell in love with the game,” he said. “Everything is so challenging, the lineups, making a tackle, going out there and running or catching the football. The execution part was really the drive that got me interested.” In high school, Dat played linebacker and made all-state. He chose Texas A&M over Florida, Michigan, Notre Dame and UCLA. Despite his small size (6’-0” – 215 pounds) he was a four-year starter, gaining an opportunity when the starter ahead of him was injured. Dat went on to an All-America career, winning the Lombardi and Bednarik Awards as a senior.

Growing up in Rockport, his parents helped build the St Peter’s parish.  There he developed his faith from his mother, who is a devote catholic and attends mass several times a week. While it might be expected that Sunday nights at the Nguyen’s might feature the NFL Sunday night broadcast the usual routine involves bible study and ice cream.

“His family overcame so many obstacles on their way to the United States,” said his wife Becky. “His mother is the rock of the family. Dat has taken on that role in the family.”

“I prayed a lot during the game,” admitted Dat.  “I got hurt quite a bit and for pain tolerance it gave me strength.”

Today, Nguyen owns a Chick-fil-A franchise near Fort Worth. “My parents are the reason I am who I am today.” said Dat. “I’m thankful and grateful for the opportunity, and now I get the chance to impact other people. In the Bible, Jesus said, ‘Come follow me and I will make you the fishers of men.’ And that’s what we are supposed to do - have a purpose. I try to walk that path each and every day and try to impact people to have a better chance a better life and fulfill their dreams."