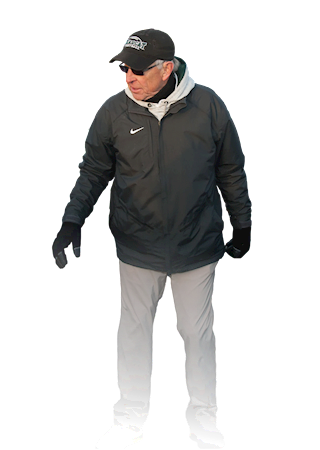 The winningest head coach in both Austin College and Northwest Missouri State history, Mel Tjeerdsma left a lasting impact on college football. Boasting an impressive 74.4 winning percentage and three national championships, his 242 career wins are the 10th most all-time by an NCAA Division II coach. Tjeerdsma began his 27-year head coaching career at Austin College in Sherman, Texas, from 1984-93. Winning a school record 59 games in 10 seasons, he led the ‘Roos to three conference titles (1984, 1985, 1988) and trips to the NAIA Division II playoffs in 1988 and 1990. In 1994, Tjeerdsma became the head coach at Northwest Missouri State, where he compiled the most wins (183) and highest winning percentage in school history during a 17-year stint. Four years after his inaugural winless season with the Bearcats, Northwest became the first NCAA Division II football program to finish a season 15-0 in 1998. He won back-to-back Division II national championships in 1998 and 1999 – the university's first national titles in any sport. Tjeerdsma’s Bearcats added a third championship in 2009, capping an unprecedented run of five national championship game appearances that began in 2005. The four-time AFCA National Coach of the Year led Northwest to 12 MIAA titles and a 32-10 record in 13 trips to the postseason. The 2009 Liberty Mutual Coach of the Year, Tjeerdsma was named the conference Coach of the Year 12 times and an AFCA Regional Coach of the Year seven times. His Bearcats won more than 11 games in all but four seasons, and his 24 consecutive wins streak from 1999-2000 is the longest run in school history. Tjeerdsma retired as Northwest’s head coach following the 2010 season, during which he led the team to a 12-2 record, a conference title and a trip to the Division II semifinals. Overall, he coached 55 First Team All-Americans, 20 First Team Academic All-Americans, 194 first team all-conference selections and one NFF National Scholar-Athlete. Tjeerdsma is a member of the NCAA Division II Football, MIAA, State of Missouri Sports, State of South Dakota Sports and Northwest’s M-Club halls of fame. In 2011, the Springfield, S.D., native coached Team USA to a world championship at the International Federation of American Football World Cup in Austria. A graduate of Southern State College (S.D.) in 1967, Tjeerdsma began his coaching career at the high school level in Iowa where he won the very first Class 2A State football championship in 1972. Before becoming the head coach at Austin College, he served as the offensive coordinator for eight seasons at Northwestern (Iowa) and helped the team win an NAIA Division II national championship in 1983. The field at Northwest’s Bearcat Stadium was named in his honor in 2007 when he was still coaching, and he received the Fellowship of Christian Athletes’ Grant Teaff Lifetime Achievement Award in 2009. Tjeerdsma has served as Northwest’s Athletics Director since 2013.

We have special hours to celebrate with you! We will be open weekly Thursday - Sunday, 10a - 5p ET. Come experience the hall with us and enjoy our 95,000 square feet of inspiration and awesome interactive fun!