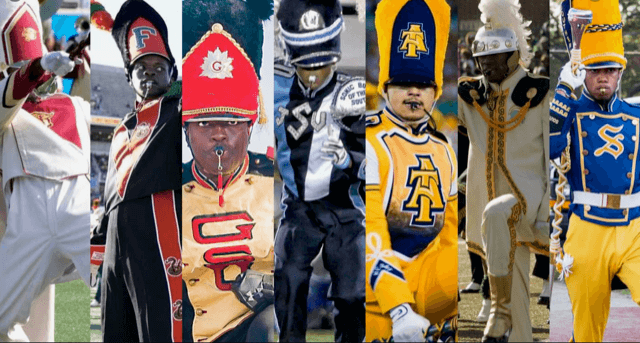 Many schools including Baylor, Southwestern, and Illinois have all made claims to holding the first modern “homecoming.” However, it was Missouri’s 1911 football game where alumni were encouraged to “come home” as they held events including a parade before the game. The response was so popular it became an annual event. Although homecomings occur on nearly every college campus, none are quite like the ones at HBCUs. Schools show pageantry that can only be matched from other HBCU’s, festivities include celebrity appearances, fashion shows, incredible concerts, step shows, and arguably the most notable - THE BANDS. HBCU bands are in a league of their own. This list features just some of the talented bands that represent Historically Black Colleges and Universities (alphabetical order by school name).

Founded in 1890, “The Marching Maroon & White” have performed at football games and parades across the nation. The band’s music and style were refined by music icons like William Grant Still (American Composer), William C. Handy (American Composer), and Wade Hammonds (Pioneer African American Bandmaster). Their music can be heard on Lucy Pearl’s album and in the documentary, “Take the Field”.

“The Marching Wildcats” are a 325 member unit which includes five drum majors traditionally known as “The Five Horsemen” and the 14 Karat Gold dancers. Also known as the “Price” the band is famous for their exciting mix of traditional flag techniques with innovative choreography.

From the moment the “Mighty Marching Panthers” arrive at a venue, the Panthers capture the attention of their audiences with their precision and pageantry. They are part of the larger organization of the Clark Atlanta University Band which also includes the Pep Band, the Symphonic Band, the Essence Dance Team, CAU Drumline, and the Silver Breeze Flag Corps. Of note the Panthers have a movie credit to their name (featured in the hit 20th Century Fox movie “Drumline”. They are featured members of the fictitious Atlanta A&T Band and Delta A&M percussion sections, CAU Band, and as movie extras).

Organized by P.A. Weller in 1892, “The Marching 100”, started with just 16 members, has grown into one of the most recognizable bands in the world. The 420-member band is credited with revolutionizing over 30 innovative techniques which have become the gold standard for many high school and collegiate bands throughout the country.

“The World Famed Tiger Marching Band” carries a proud legacy; their talented arrangements and showmanship have been inspiring audiences for nearly a century. The GSU marching band has performed for diplomats, music fans, and of course Tiger fans around the world.

Sonic Boom of the South

The unforgettable sound of “The Sonic Boom of the South” has been inspiring fans since the 1940s. Their iconic dance team, drills, and drumline have made a name for themselves with football fans across the country performing both in college and the professional ranks.

Founded in 1949,  by Mr. Iva “Bossman” Williams, the band consisting of 35 members would perform at football games among other events on campus. After a hiatus, the band returned in July of 1996.  The new director Mr. Arthur Means Jr. was given the monumental task of putting together a quality band for the first football game in August. He succeeded and that year the band would perform at a presidential rally and recognition. “The Purple Marching Machine” would go on to perform at a presidential campaign rally, the inaugural Pioneer Bowl in Atlanta, and the Macy’s Thanksgiving Day Parade.

Known for its fierce performances and powerful drill formations, “The Spartan Legion” has combined a military precision with a love for music. The band performed at 44th President Barack Obama’s campaign rally, and they have also played at numerous Battle of the Bands, Mardi Gras, and HBCU sanctioned events.

“Aggie Pride” is a familiar greeting between North Carolina A&T fans. One of the most iconic HBCU bands, “The Blue and Gold Marching Machine” has performed in the Battle of the Bands competition in Atlanta and the Macy’s Thanksgiving Day Parade. NCA&T is always joined by “The Golden Delight”, a unit of dancers, baton twirlers and color guard members.

Since World War II, “The Marching Storm” has been performing for audiences across the nation. The band has performed in the Tournament of Roses parade, NFL opening games, and presidential inaugural parades, the marching band has distinguished itself as one of the premie marching band in the country.

“The Marching 101” was founded in 1918 and consists of over 275 members today. The band makes appearances across the country, from representing South Carolina State in bowl parades to NFL games. The band has won Atlanta’s annual Battle of the Bands competition.

“The Human Jukebox” at Southern University is known for its jaw-dropping showmanship and dance team, “The Fabulous Dancing Dolls.” They have performed with Madonna at the Super Bowl and are featured on a Beyoncé album. They can transform any song into a signature piece with their impeccable drill technique and flawless sounds.

TSU’s Ocean of Soul was founded in 1969 by Benjamin J. Butler II. The “Ocean of Soul” name was given by a local radio show, talking about a mountain of soul for Houston, its garnered attention on a local and national level. The flashy, pace setting band was first introduced to the Public at the 1973 Battle of the Bands competition.

“The Trojan Explosion Marching Band” continue to raise the bar for HBCU marching bands. Founded in the 1950s and known as the “Marching 110” the band continued to expand. However, in 1984, seventeen students arrived for the first day of practice, a sharp change for band director Harold J. Haughton, SR., who had just left Jackson State University’s Sonic Boom of Sound. However, he persevered, renamed the band the “Trojan Explosion” and the rest is history. The band has performed throughout the country, the Battle of the Bands in Atlanta, and at the White House for the nation’s 44th President, Barack Obama.