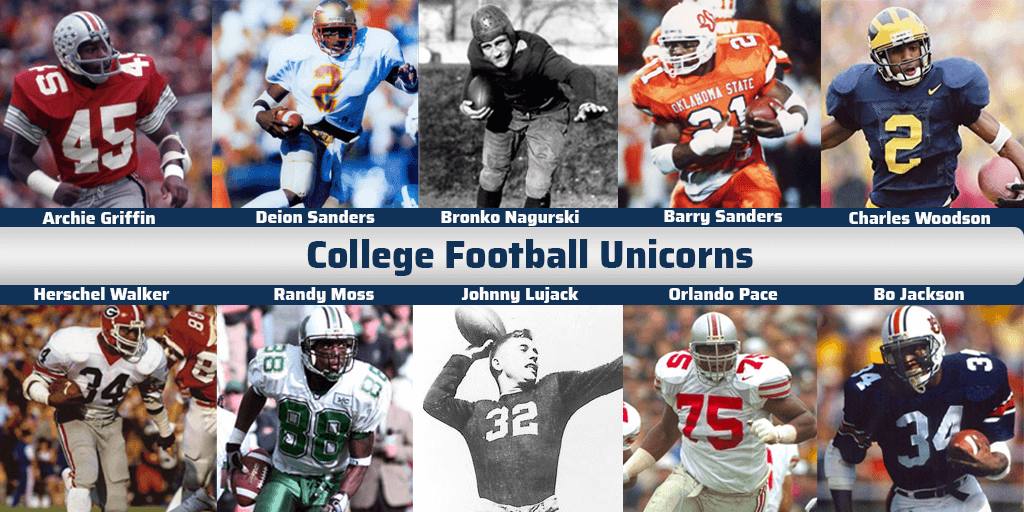 Unicorns are unique creatures. Notre Dame Hall of Fame quarterback Johnny Lujack was a unique signal caller and is a one-of-a-kind Hall of Fame member. Playing in the one platoon era, he also had to excel on defense.  His open field tackle of Heisman winner Doc Blanchard saved a touchdown and preserved the 0-0 tie against Army in the 1946 Game of the Century.  In 1943, he began the season as the backup to Heisman winner Angelo Bertelli.  After the season’s first six games, Bertelli left school to enter the Marines. Lujack became the starter and Notre Dame went on to win the National Championship. The following year, Lujack entered the Navy hunting German submarines. He was back at Notre Dame in 1946, leading the Irish to an undefeated season and the national championship; a feat he repeated in his 1947 season that included winning the Heisman Trophy.

Michigan’s Charles Woodson won the 1997 national championship. During that season Woodson recorded eight interceptions and scored touchdowns as a receiver, running back and return specialist. He is still the only primary defensive player to win the Heisman Trophy.

During his two seasons at Marshall, Randy Moss had one of the most remarkable stretches of production of any wide receiver in college football history. After playing Division I-AA (FCS) in 1996, Moss proved he could be just as productive in Division I-A (FBS). Moss had 1,820 receiving yards and 26 touchdowns. He finished his career with 4,706 all-purpose yards and 55 scores in just 28 games.

Bo was one of the greatest athletes in American sports playing both football and baseball professionally. At Auburn, he rushed for 4,303 yards in route to the 1985 Heisman Trophy.

A player ahead of his time, Bronko Nagurski stood out on the gridiron. He was a big and hard hitting back who towered over most defenders standing 6-2 and 217-pounds. He went on to be the Chicago Bears fullback from 1930-1937 and even came out of retirement during the 1943 season to fill the gap that WWII had left.

Deion “Prime Time” Sanders was one of the most electric players in college football history. During his time at Florida State he lettered in football, baseball, and track.

Barry Sanders only started one season in college football, but his 1988 season was one of the most impressive all-time. He shattered the record books with 2,628 rushing yards and 39 touchdowns. This does not include his 22 yard and five touchdown performance in the 1988 Holiday Bowl, as bowl statistics were not included during the time.

The Ohio State legend is near mythical in Buckeye country. He is the only two-time Heisman Trophy winner in history, winning the award in 1974 & 1975.

The “Pancake Man” for flattening his opponents with his exceptional blocking techniques. He finished fourth in the 1996 Heisman Trophy voting, the highest a lineman finished since 1980.

Herschel Walker’s 1980 season made him the most productive freshman in NCAA history at the time. He rushed for 1,616 yards and 15 touchdowns, helping lead Georgia to an undefeated season and national championship. During his UGA career Georgia would only lose three games and fall two Sugar Bowl losses away from three straight championships.