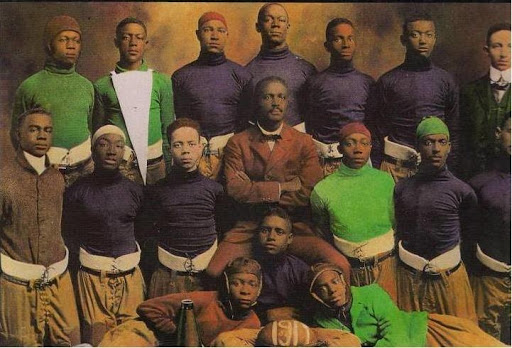 With a few exceptions, Historic Black Colleges and Universities (HBCU) were established in southern states after the Civil War.  Private schools were most often religious affiliated.  The Morrill Act of 1890 required states to establish land grant colleges if African-Americans were excluded from attending existing state schools. With segregation rampant in the 100 years after the Civil War, the only alternative for African-American college bound students were HBCU’s.

The first HBCUs were founded in Pennsylvania and Ohio prior to the American Civil War, with the purpose of providing youths, who were largely prevented, due to racial discrimination, from attending established colleges and universities. The first two HBCUs were Cheyney University and Lincoln University both in Pennsylvania.

The oldest, chronologically, HBCU was founded on February 25th, 1837. The African Institute moved from its original home in Philadelphia to a farm 25 miles outside the city once it was owned by another Quaker named George Cheyney. Until that point, it had been a secondary school. In 1914, it was renamed the Cheyney Training School for Teachers and became an institution of higher learning and awarded its first degree.

In those 77 years between its inception and its formalization as a university, 97 other historically black colleges and universities had been founded. Today the school is known as Cheyney University of Pennsylvania. Although Cheyney no longer participates in football, their historical impact on and off the gridiron is undeniable.

The oldest, degree granting, HBCU was founded on April 29, 1854. Ashmun Institute was chartered by Presbyterian minister the Rev. John Miller Dickey and his wife, Sarah Emlen Cresson, who was a Quaker, to provide higher education in the arts and sciences for black men. In 1866, the school was renamed Lincoln University in honor of assassinated President Abraham Lincoln. After a 48 year hiatus, Lincoln football returned on August 30, 2008 where they defeated George Mason University 34-7.

Livingstone Mzimba (left) and Harry Mantanga (right), students from the eastern Cape, were ends on the Lincoln College football team in 1907 when this photograph was taken. After graduating, both returned to South Africa and became Presbyterian ministers.

Before the SEC & ACC there were HBCUs 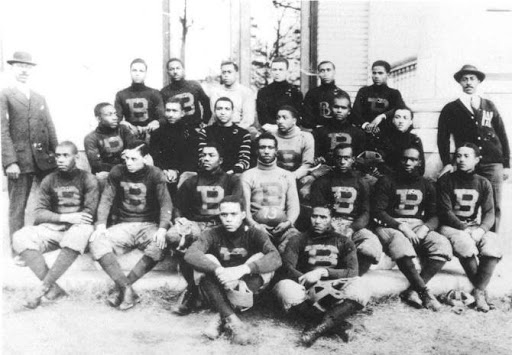 The game was between Livingstone College in Salisbury, NC and Biddle College (now Johnson C. Smith University) in Charlotte, NC. The Livingstone Bears formally organized in the fall of 1892. The men at Biddle had to study the game of football for two years before mounting the challenge to Livingstone. Team members purchased a regulation football, and uniforms. The players equipped their street shoes with cleats, removing them after practice.

The young women of the Livingstone’s industrial department made uniforms for both teams for the inaugural game. Livingstone awaited the arrival of Biddle, who traveled by horse and buggy to Salisbury. This first game featured two 45-minute halves. The game was a hard fought, in snowy conditions. Biddle College scored the first touchdown and were up 5-0. Later in the game, W.J. Trent scored Livingstone’s only touchdown on a fumble recovery. Biddle argued that the fumble was recovered out of bounds. The official ruled in Biddle’s favor, allowing them to keep their 5-0 lead that would become the final score in the first game.

While integrated, professional football was slow to recognize the vast untapped talent base of African American players competing at HBCU’s.

In 1960, the American Football League was formed.  Being in competition with the existing National Football League, the eight teams of the AFL looked for alternative means to find talented players.  Pro football scouting at the time was very primitive.  There were very few scouts, no combines, and the players selected by pro teams in the collegiate draft were selected largely by tips and recommendations from collegiate coaches. With little connection between the pros and HBCU coaches very few HBCU players ever made it to NFL rosters.

The AFL’s alternative source for players were the overlooked small college ranks, particularly the players at HBCU’s.  In 1962, the AFL established a pro first by first selecting Grambling’s Buck Buchanan with the first pick of their draft. The NFL quickly took notice of the many high-quality players by AFL teams on HBCU rosters.  In response, the NFL created scouting combines where teams would pool their resources to evaluate players at HBCU’s.  The first scouting collective, LESTO, (for Lions, Eagles and Steelers) was formed in 1963.   The Bears soon joined the group, changing the name to BLESTO.  Soon other pro scouting combines followed.

The result of having scouting done on a comprehensive level was an explosion of the number of HBCU players who were selected highly in the professional draft.

However, this trend of selecting large numbers of HBCU players in the NFL draft began to fade by the mid 1970’s.   As major college schools in the south ended their discriminatory recruiting practices in the early 1970’s, highly talented African American players who previously would be found on the roster of HBCU teams were now playing for Atlantic Coast, Southeast and Southwest Conference teams.

The first three games were played at Legion Field in Birmingham, AL. In 2008, the game moved to the Citrus Bowl Stadium in Orlando, FL. In 2016, the Challenge started a two year period of playing at campus sites. The 2018-2020 games are being played at Georgia State Stadium in Atlanta. This is a perfect bridge for the annual Celebration Bowl in December held at the Mercedes-Benz Stadium in Atlanta.

The Celebration Bowl is a postseason football game between the conference champions from the Mid-Eastern Athletic Conference (MEAC), and the Southwestern Athletic Conference (SWAC). This Bowl kicks off the college football bowl season. The inaugural Celebration Bowl was played on December 19th, 2015. North Carolina A&T (MEAC) and Alcorn State (SWAC) faced off in an exciting game. NC A&T won 41-34 in front of over 35,000 fans at the Georgia Dome in Atlanta, GA.  The Aggies have been dominant winning four of five Celebration Bowls. The game's mission is to provide the schools, alumni, fans and sponsors with a first-class bowl experience while continuing to celebrate the heritage, legacy, pageantry and tradition of Historically Black Colleges and Universities.

Please be sure to stop by the College Football Hall of Fame and see the HBCU exhibit and the rich tradition of these colleges and universities. PURCHASE TICKETS HERE