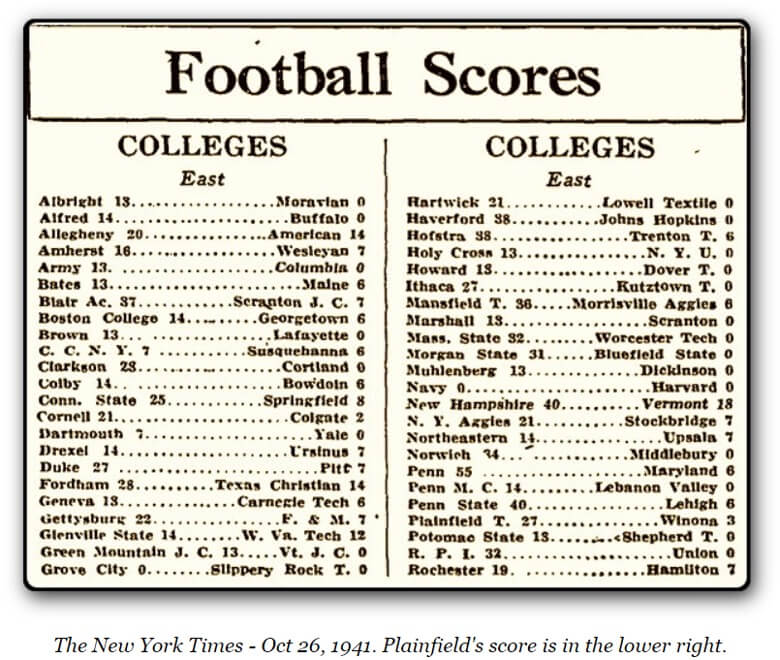 Happy April Fools! The College Football Hall of Fame is taking a look at one of the most legendary pranks in college football history.

In 1941, two New Jersey businessmen (Morris Newburger and Alexander Dannenbaum) fooled the sports departments of the major New York and Philadelphia newspapers.  Each Saturday afternoon the two would call the New York and Philadelphia papers with the football score of Plainfield (NJ) Teacher’s College. This was normal of the time. However, the school and the team didn’t exist.

After a few weeks of this ruse, the two took the joke a step further.  Newburger, took the name Jerry Croyden as the publicity director for Plainfield and began sending news releases on the made-up team.  Hop along Hobelitz was the coach whose offense used the “W Formation.”  The center faced backwards so that he could see which way the backs were running.  The star of the team was Johnny “The Celestial Comet” Chung. The passing game featured a feared pass catching end named “Boarding House Reach” Smithers.

The hoax came to an end when a reporter for a Philadelphia newspaper went to Plainfield and found that no school by that name existed.  When outed, Newburger sent out a final press release stating that due to the player’s failing grades at midterms the rest of the season would be cancelled, and the team would not appear in the Blackboard Bowl.

While they were the victim of a prank, sports writers saw the humor in the entire episode as Caswell Adams of the New York Herald concocted the Plainfield alma mater which was to the tune of Cornell’s “Far Above Cayuga’s Waters.”

That got on the wires.

Perfect record made on paper,

Hail to thee, our ghostly college,

Product of a dream!

For stories like these and to experience 95,000 sq. ft of all things college football be sure to click here to purchase tickets and plan your visit to the College Football Hall of Fame!